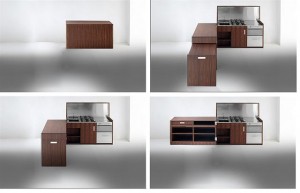 Even if it originates from the family of concealed kitchens, Opening is more than an invisible kitchen. It is not simply a built-in kitchen unit that can disappear but a real Kücheraum, a “Kitchen Space”, which, whenever its job ends, changes its shape and volume and is adjustable for other purposes as a different object.
The German concept of Raum, hardly translatable with the English word “Space”, has been pivoting the twentieth-century architectural and artistic debate and, combined with the concept of “existenz minimum”, for some decades has oriented the research on modern home: how to conceive the space, how to match different spaces, how to make the best of them, how to organize smaller and smaller spaces in order to use them as wider ones, how to make them flexible and open to different suggestions and possibilities.
From this point of view Opening performs the evolution of contemporary living typologies, lofts, studios, lab houses, holiday houses… wherever it is, it lends itself to define different combinations of space by simply opening itself.
Put in two cases, once its four screws have been unscrewed, it becomes an “object” that can be easily carried away and this way it meets the increasing need for mobility of contemporary lifestyle.

A fine piece of furniture and a kitchen at the same time, Opening appears as a block of precious wood, totally smooth, absent and essential: when it is closed it does not reveal its being a kitchen, which however hides astonishing potentialities inside. As a matter of fact, once it is opened and thanks to its rotating and sliding devices, Opening proves to be able to create always different arrangements, convivial spaces where cooking becomes a shared experience while the wide sliding pull-out table can be, from time to time, something to lean on, to have dinner on, to talk around , to work…

Opening therefore allows to enlarge the living area starting from the stage of planning, which gets rid of the conventional kitchen room, by replacing it with a wooden piece of furniture which, when needed, becomes a kitchen, while otherwise it furnishes the living area with polished style, to the advantage of the spaces of the other rooms that are redefined in accordance with the planning choices.

The Countdown to Eurocucina Has Begun!