Approximately six weeks before the start of LivingKitchen 2015, some exhibitors give a taste of the products which they will present at the fair in a press release. Some even reveal the world premieres they have in store. The LivingKitchen team wanted more detail and therefore carried out a survey among the exhibitors. The results showed that the international kitchen event is certain to reflect all the facets of a strong industry.

The comprehensive overview provided by the manufacturers of kitchen furniture, integrated kitchen appliances and accessories allows the 150,000 industry visitors and consumers expected to attend to become acquainted with the kitchen trends of tomorrow, as world premieres and important product modifications will be presented to a national and international public for the very first time in Cologne.

Almost all the appliance manufacturers surveyed said they avail of LivingKitchen for the first-time presentation of their products. The new integrated kitchen-appliances range from Panasonic will be launched in Cologne. After the fair, the products will be available first in Germany and Great Britain.

Miele presents two new developments at once: one is a new model rounding out the integrated kitchen appliance Generation 6000 and is announced as a “completely new product category”. The second premiere are large-sized ovens, so-called range cookers, designed for the North American market which are now to be introduced to the European market for the first time. Another new range cooker is also the centre of attention at British company AGA Rangemaster: they will present the Nexus model from Falcon, which now features the most up-to-date induction cooking technology. In addition, the free-standing AGA City 60 cooker, measuring just 60 cm across, designed for smaller apartments, will be presented internationally for the very first time.

Bora will present an extension of their three product lines, BORA Basic, Classic and Professional. Neff will present the SeamlessCombination adding a new integrated appearance to their MegaCollection. Vestel has modified several appliances for the occasion of LivingKitchen, while Gaggenau has announced a world premiere in the area of baking and steam baking.

Within the furniture sector, two exciting new kitchen systems will be presented: Naber presents its modular kitchen system – Concept Kitchen, initially introduced at the first edition of LivingKitchen in 2011, in a new “stylish context”, as revealed by Managing Director Hans-Joachim Naber. Design agency Formquadrat presents a study on vegetarian cooking. The project with the memorable name “Vooking” (vegetarian cooking), is an innovative concept, the appeal of which will certainly not be limited to vegetarians!

In the luxury-furniture segment, manufacturer SieMatic will present its new collection “SieMatic Urban”, with the new SieMatic 29 as a highlight, for the very first time at LivingKitchen. The Pure and Classic collections, each targeting a different consumer market, will also be staged at LivingKitchen. Premium brand TEAM 7 will not present a new model but will introduce new solutions,

including those aimed at integrating the kitchen and the living area as well as at the effective usage of storage space. 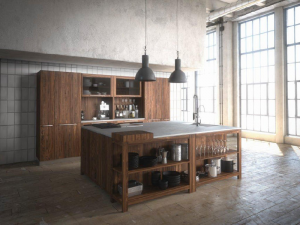 In the worktops segment, Cosentino presents five new colours with a special veining for its Dekton surfaces. Silestone, Cosentino’s quartz surfaces, will also debut a new colour option. JUMA presents its solid-ceramics line, JUMAceram, to the industry audience for the first time as well as new decors for JUMAquarz. And Strasser Steine will showcase their new product concept ST-ONE at LivingKitchen. The concept is based on monolithic natural stone islands which can be beautifully combined with kitchen furniture from a variety of manufacturers.

In the sinks and accessories segment, Quooker presents a considerably simplified installation of its “boiling-water tap”. Blauwasser home celebrates the next generation of waters filters and presents the safest filtration to an international audience in Cologne. And at Caressi, things are brightening up: the Dutch company presents a new colour range for their fittings. Dornbracht also intend to take advantage of LivingKitchen as an opportunity for debuting new developments – but they weren’t prepared to give any details away just yet!

LMW Leichtmetallguss, a manufacturer of cast aluminium household products, presents its own frying and cookware series “EUROLUX” for the first time in Cologne. Kitchen lighting is covered by manufacturer Hera, who will present new intelligent LED modules and lighting for the underside of kitchen furniture.

The “Modern Art” kitchen model by Allmilmö celebrates its 25th anniversary while at LivingKitchen. The handle-free kitchen was presented at imm cologne for the first time in 1990 and has undergone various meticulous modifications and technological advancements over time. There is also a 50th anniversary to celebrate at LivingKitchen: in 1965, Heinz Milewski founded a kitchen-furniture factory in Zeil am Main which was taken over by Johannes la Cour and his siblings in 1996.

The KüchenTreff Association will turn 20 and celebrates its anniversary with an international world premiere. For the occasion, a kitchen accessory will be presented at LivingKitchen which, after the fair, will only be available at KüchenTreff member retailers.

Some manufacturers will present product premieres which they have already showcased in other environments. Now they are taking advantage of LivingKitchen to present the products on an international level for the first time. These include the multi-generational kitchen from Ballerina, which was developed for its comfort-kitchen concept. And four new models from Rational
will be introduced at LivingKitchen, staged completely in white. Ernestomeda will present its new version of the Icon kitchen as well as the newly conceived Soul.

Spekva presents a new worktop in vintage-oil finish, Ellici a new material for sinks and Irinox its new flash-freeze appliance for private households. Bosch presents its Series 8 ovens which can be operated in part via an app on a mobile device. Siemens also go online with the iQ 700 series and offer many new usage options thanks to mobile network integration. Miscea presents its
touch-free sensor tap with integrated soap and detergent dispensers. PlasmaMade will also make an international debut in Cologne with its air filter that dispenses with cooking fumes. LivingKitchen is also an opportunity for American Appliances to present its new GE_MABE side-by-side fridge-freezer combination in new colours.

With so many innovations and world premieres, LivingKitchen, the international kitchen event, promises to be an extremely diverse show, presenting the kitchen trends of tomorrow to visitors. It is already safe to say that with over 200 exhibitors, there are certain to be even more premieres and new product developments to discover at the fair.

If you would like to check on the new designs, functions and materials regularly in advance of the fair, you can also visit the online database of new products: