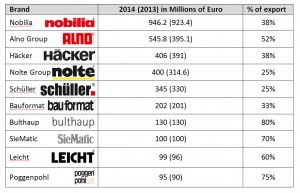 küchentrends – The Little Kitchen Trade Show That Could!

DoPont Corian – A Comeback… in Europe!