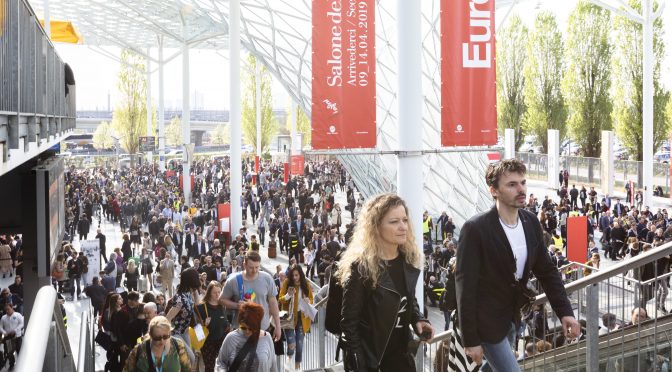 An extremely positive result for the 57th edition of the Salone del Mobile.

Milano, both in terms of attendance and in terms of the quality of trade relations, has once again attracted people from around the world. The great weather this year, the record crowds and the world positive economy, were a great set for business networking and lots of excitement, in the exhibition pavilions from day one.

434,509 attendees, in just 6 days, from188 different countries, made for a 17% increase compared to the 2016 edition, which featured the biannual kitchen and bathroom exhibitions, and an increase of 26% compared with the 2017 edition of Saloni del Mobile.

EuroCucina is just around the corner and the excitment is building up by the day. Who’s in the show, who’s out this year and so much more, in the coming months. In the meantime, a new concept in salone, which is not just kitchens will be introduced this year –

With just four months to go to the launch, the final touches are being put to the 53rd edition, which  will be held from 8th to 13th April. The focus is on powerfully emphasising Milan’s centrality and its unique position in terms of the quality of its design and furnishing at global level.

“The Salone is a valuable resource for the Italian economy,” said Cosmit President Claudio Luti. “Not only does it need to be preserved, it also needs to be bolstered with innovational services and projects catering to international business and client demand, in order to make the Milan event more attractive than ever.”

Works in progress for the next edition include the exhibition to be held at the Fairgrounds ?  a show  that will tell the story of the domestic interiors conceived and inhabited by top contemporary architects from several different continents: Europe, North America, South America and Asia.

“Where Architects Live” is an original installation, inspired by leading contemporary architects’ own concepts of the domestic space. It will be virtual progression through the buildings in which the architects themselves live, illustrating just what is involved in designing homes for the most demanding people of all ? themselves ? with the freedom to experiment with visions and language.

The curator of the event/installation, Francesca Molteni – who curated “Design Dance” with Michela Marelli (2012) and “A Celestial Bathroom” (2010) – has been privy to the private homes of some of the greatest exponents of the architectural world greatest exponents of the architectural world, filming the exteriors and domestic spaces and recording  an interview with each of them on the triggers, inspiration and choices that have shaped their design  and professional careers.  “The aim of the event”, continued Mr. Luti, “is to explore the art of living today, with a close look at  the people who are changing the face of our cities, the configuration of the global landscape and  the collective imagination, putting the spotlight on new ways of planning domestic environments from every possible aspect. This is the fundamental mission of the Salone del Mobile, cultural concepts that drive the sector.”

The Vipp story begins one spring Sunday in 1931 when 17-year-old Holger Nielsen wins a car in a lottery at the local football stadium. Holger loves cars but has no driving licence, and he therefore decides to sell the car and invest in a metal lathe. This marks the beginning of Holger’s metal factory where, a few years later, he creates the product that will make him famous around the world: the Vipp pedal bin.

Since then Vipp has grown into a large family offering a wide range of products. Today, the original bin is available in five sizes and has been joined by several new bathroom and kitchen products.

The kinship in the Vipp collection is unmistakable in both the choice of materials and style. The new products are manufactured using the characteristic Vipp materials, steel and rubber, enhancing Vipp’s more than 70-year-old tradition for excellent craftsmanship and durability.

Now, some 80+ years later, Vipp is launching one of its most sensational product-developments with a radical reinterpretation of the kitchen.

Since the creation of the bin in 1939, Vipp has become synonymous with quality products for the kitchen and bathroom.

“Vipp’s experience lies within product design focusing on solid materials, mechanics and function. As a consequence we have chosen to design the Vipp kitchen as a product or rather as a piece of furniture. The result is a range of kitchen modules where choices have already been made based on a thorough knowledge of materials combined with an aesthetic opinion on what constitutes good design.” – chief designer in Vipp, Morten Bo Jensen.

Vipp’s more than 70 years of experience within processing of steel makes stainless steel an evident choice of material in the development of the Vipp kitchen.

“Like with the Vipp bin, we bring the industrial look into the home with the new kitchen – a solid product, standing to be used day after day.” – Morten Bo Jensen.

A range of modules in different sizes can be combined and formed after individual needs. The complete Vipp kitchen concept unfolds in every detail – even fixtures, drawer pulls and inserts, as well as gas knobs are developed in respect to Vipp’s design DNA injecting a functional and visual cohesiveness into the kitchen.

The Vipp kitchen is sold in Vipp Flagship Store in Copenhagen.

Formed in 2009, by Miles Hartwell and Matt Withington and located just south of London, SplinterWorks is one of the best examples of ‘applied arts‘ I’ve seen in recent years. They have delivered projects all over the world,  in the USA, UAE, Southern Ireland, Cyprus, France, Italy and even one in Australia. 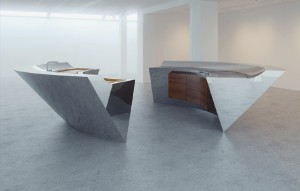 SplinterWorks have a particular affinity with developing work that re-thinks how we prepare, cook and experience food. They bring the activities of the kitchenout of the grid shaped room at the back of the house and into the living areas creating works to be enjoyed socially, physically and visually. 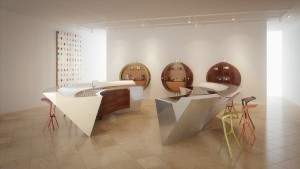 The majority of their works are unique commissions where every element, from the intended location and practical elements, to striking a personal resonance with the commissioner, can be considered and accomplished. 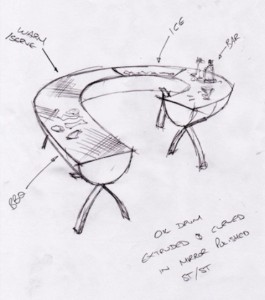 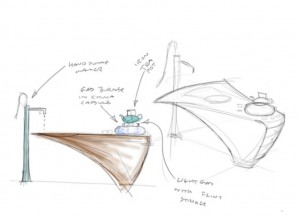 · Excellent mood amongst the  1,213 providers from 48 countries

On 23rd January 2011, the imm cologne and LivingKitchen in Cologne drew to a close with an excellent result. Including estimates for the final day of the fair, the dual event drew around 138,000 visitors to Cologne – an increase of 38 percent. 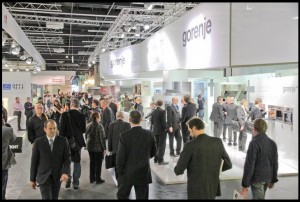 “What’s been happening here over the last few days is unbelievable. What trade fair can announce such marked double-digit visitor growth? That’s a great signal for the consumer goods trade fairs in Germany during the course of the year and convincing confirmation that trade fairs are a highly efficient marketing tool,” sums up the trade fair’s visibly satisfied commander-in-chief Gerald Böse. “We have all become part of a success story called imm cologne and LivingKitchen. Cologne is the absolute focal point of the furniture industry again, especially when it comes to the business side of things, as well as home to the international kitchen furniture industry,” adds the CEO of Koelnmesse. Dirk Uwe Klaas, Chief Executive of the Association of the German Furniture Industry (Verband der Deutschen Möbelindustrie), came to a similar conclusion: “It was by far the best furniture fair we’ve had in the last 10 years: more visitors, more contracts signed and an excellent mood. An excellent start to the 2011 furniture year for our national furniture industry and a huge success for Koelnmesse.” 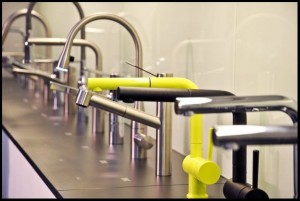 The unique combination of furnishing and kitchen worlds convinced both trade visitors and the general public. The excellent reception the event met with Page2 from visitors during the entire week of the fair ensured beaming faces on the manufacturers’ side. 138,000 professional buyers and consumers from 128 countries flocked to the exhibition halls of the imm cologne // LivingKitchen – 38 percent more than attended the previous event (imm cologne 2010). There were significant increases amongst trade visitors, not only from within Germany but above all from abroad, most notably from the Netherlands, France, Italy and Switzerland, as well as Eastern Europe in general and Russia in particular. In addition, more buyers were registered from important export markets like Asia, the Near East and North America. All in all, the trade fair drew increased numbers of visitors from almost all countries. “This result is convincing proof that the diverse activities and high level of commitment we put into attracting national and international visitors were successful and have definitely paid off,” says Gerald Böse

The extremely good mood at the imm cologne was reflected in the halls of the LivingKitchen fair:

· “What we’ve experienced in Cologne in the last few days speaks volumes. I’m particularly delighted that the kitchen has returned to Cologne with such a spectacular sensation,” sums up Hans Strothoff, Chairman of the MHK Group.

· “We are extraordinarily pleased with the way the fair has gone and the result. The response from dealers and visitors from Germany and abroad was very positive. And the number of visitors far exceeded our expectations,” says Roland Hagenbucher, CEO of Siemens-Electrogeräte GmbH 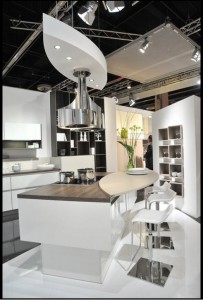 · When it comes to covering fabrics, plain colours dominate. Colourful stripes or abstract graphics are popular choices for accentuation. White remains the megacolour. In the leather segment, thick, barely treated natural leathers with a tactile, inviting character are particularly popular.

· LED lighting technology has made its breakthrough. The majority of wardrobes, wall units, sideboards and display cabinets are being equipped with this energy-saving lighting technology. LED fulfils two functions: brightness and atmosphere.

· Sustainability is playing an increasingly important role in furniture construction too. Wood is becoming more and more popular, not only for storage and kitchen furniture but for comfortable chairs and loungers and as a visible component of sofas. Wood is reclaiming its former status in the furniture sector. One striking development: the many items featuring untreated oak, sometimes even complete with bark.

* All figures are calculated according to the guidelines of the Society for the Voluntary Control of Fair and Exhibition Statistics (Gesellschaft zur Freiwilligen Kontrolle von Messe- und Ausstellungszahlen, FKM)